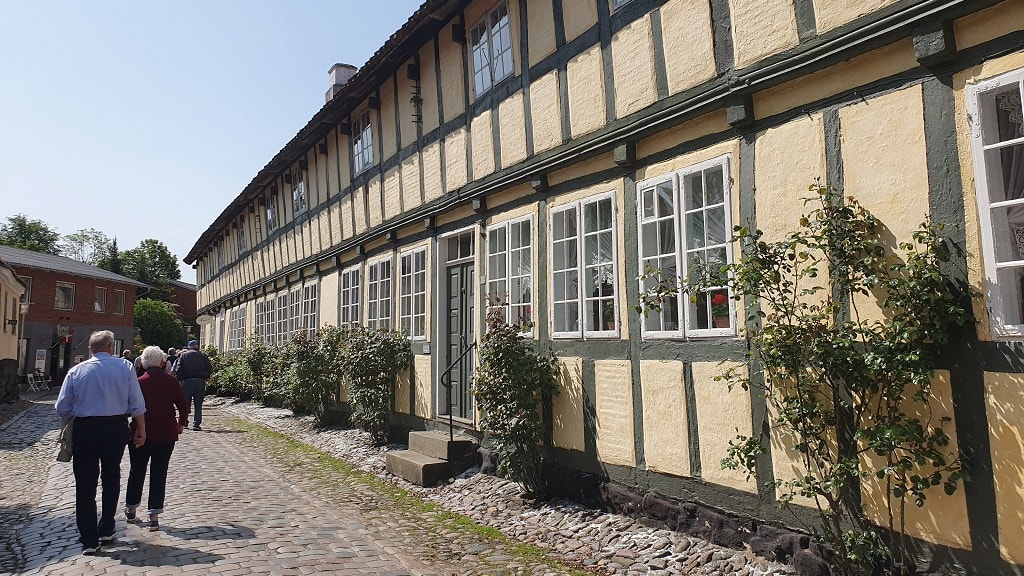 Photo: VisitMariagerFjord
Attractions
Buildings and townscapes
Mariager is an old town with a lot of history. The town used to have a big fishing industry as well as a ferry at the harbor, that made it possible to cross the fjord to the small village Stinesminde. The history of Mariager is still a big part of the city and you can see it everywhere you go. The old houses are still crooked and the streets are still cobblestoned. The old buildings are remains from the past, but are still in function and a big part of the present, the life and the culture in Mariager. Get to know more about some of the old buildings here.
Address

The old city hall is a majestic big building located in the town square. The architectural structure of the building makes it stand out and it is kind of a monument in Mariager. On the top of the building you can see the “landmark” of the city – The Crane, and also the 2nd sentence of “Jydske Lov” written in gold: ”Var ei lov i lande da havde hver meest som meest maatte gribe”.  Which means: If there wasn’t a law in the country, the people that had most, where those that had gathered the most. Meaning that people would take anything which didn’t belong to them, because they couldn’t get punished for stealing.

The gold plated crane which is solid planted on the roof of the old town hall, is resting on one of it legs and is holding a stone with the other one. The crane is known for guarding the town of Mariager and its citizens.

The reason why the crane is holding the stone is actually so the crane doesn't fall asleep. If the crane fall asleep, it will drop the stone and the the city will no longer be protected by the crane. The crane is an ancient symbol of alertness and immortality.

The old town hall was built in the years of 1821-22. When they build the large administration building they also made room for a prison as the town was in need for one. The prison was set in the attic of the town hall. If you did end up going to prison back then it was called “to be put under the stork” – translated directly from the Danish saying. It was the gold plated crane, which the citizens of Mariager was referring to back then. The prison was in a period actually located in a separate building behind the town hall.

The old town hall has in recent times being used as a courthouse and as a lawyer office. Latest the building has been homestead of the tourist organisation VisitMariagerfjord as well as a tourist information office until 2020, where the tourist organisation was merged with VisitVesthimmerland and is now known as VisitHimmerland - with a office located in Aars. The tourist information office has now been moved to Mariager Saltcenter.

Bugges Gård was built in 1732 and is an old merchant’s house. The courtyard has a very beautiful door, that according to the story used to belong an old church in the region.

The long yellow and a bit leaning house is one of the town’s old merchant’s house. The house has been a part of a large four-length farm where they also had the farms agriculture. The farms history goes all the way back to the 16th century but it burned down in a huge town fire in 1732. Luckily, it was rebuild in no time. They reconstructed the entire property and are now housing small homes for the eldest citizens in the town. “Bugges Gård” is still the name of the property, which is the name after the last merchant of the place.

Around the year of 1780, the town of Mariager had seven "gateways" with booms where people had to pay a charge to enter the town. The old Gate-House (Bomhuset) in Teglgade in Mariager was one of them back then. Teglgade was a previous gateway from Hobro and therefore this was the official gate-house where they charged for all consumer goods that there came to Mariager.

In 1820, the current gate-house was erected by a merchant named Sorvad and was in many years rented by influential citizens in Mariager.

See all in this area